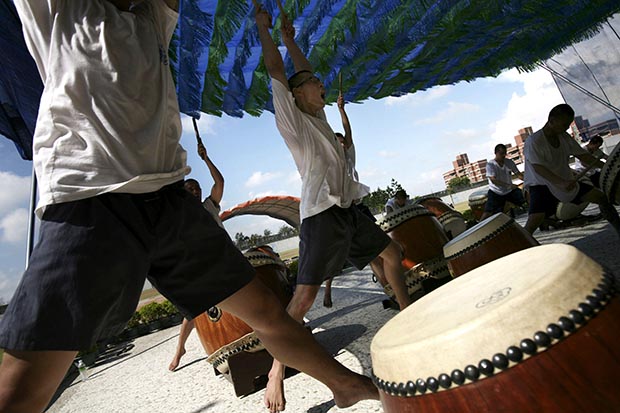 
Jussi Lehtonen observed drum teaching in a Taiwanese prison. In this article, he delves into some basic questions on the potentials of arts in the prison institution.

When we reach the yard of the prison sports field the skies start to pour. Seventeen young men wearing white T-shirts and blue shorts are meditating on a platform set up at the edge of the field, their faces pouring with water. Their expressions don’t even flicker. A few moments later the sun starts mercilessly shining again from a cloudless sky. In temperatures soaring at nearly forty degrees Celsius the men pound on Chinese tanggu drums and perform acrobatic jumps around them. Now their faces are pouring with sweat. The men are very skillful. The beats of the drums resound from the prison walls.

I’ve been invited to watch the Taiwanese U-Theatre teach inmates in the local Changhua Prison. The theatre is internationally renowned for its Zen drumming performances. The class is given by drumming instructor Ibau, an actress who has been a member of U-Theatre for more than ten years. I’m very excited, since drums were also in a key part last autumn in the performance titled “Vapauden Kauhu” (The Horror of Freedom), which I directed for the Kiasma Theatre in Helsinki. The performance featured former prisoners alongside theatre professionals. Today in Changhua Prison the activities include, apart from drumming and meditation, also tai chi and chi kung exercises and discussion.

The music director at U-Theatre, Chih-Chu Huang, told me yesterday why he believes that drums are well suited for prisons: “The sound of traditional Chinese drums is low and soothing. It cleanses the thoughts and the mind. The drummer gains possession of his inner strength and serenity. Also people who are not musically gifted in a traditional sense can learn to play drums.”

In the yard of Changhua Prison Huang’s words turn into flesh in front of my eyes.

The piece performed by the prisoners – who are now called students and artists – is called “Waves Breaking against the Ocean Shore”. It was originally part of the U-Theatre classic performance, “The Sound of the Ocean”. The Changhua prisoners will perform it in September together with the U-Theatre core group in seven cities throughout Taiwan when the theatre will organize its traditional meditation trek from the southern to the northern end of Taiwan. On stage the prisoners can be distinguished from the other performers by the masks behind which they hide their civilian selves from the public eyes. U-Theatre has taught drumming in Changhua Prison for seven years already and former inmates have also become permanent members of the group.

But how does one get so skillful by practicing only once a week?

Ibau tells me that the prisoners also get to practice in their wards, pounding on chairs with sticks padded with sponges. Many of them have related experience from the days before they were imprisoned, having served as dancers at temple fairs.

In Taiwan the culture of Taoist temple fairs is a fixed part of people’s lives. A community may employ sons from poorer families or from families in peril of marginalization to perform at a temple fair. In connection with the performances the boys also learn to make exquisite face paintings. It is a question of a ritual in which young men temporarily abandon their civilian selves to become gods. The gods are often scary, and temple fairs thus often involve elements of ‘machismo’ and boasting in a form acceptable to the community. The young men get to work, learn traditional skills and enjoy exceptional experiences of empowerment and being seen. “But there’s a flipside to the phenomenon, too”, Ibau remarks. “It is in temple dancer troupes that many young men end up in bad company and on a path of crime, which may finally lead here, to Changhua Prison, as an example.”

Ibau’s teaching includes, besides practical exercises, also writing and discussion. This time Ibau has shared with the students an article in which a Taiwanese journalist suggests that prisons be turned into art schools. Their task would be to uphold and develop traditional Taiwanese art forms, which today’s young people lost in virtual worlds no longer have an interest in learning. In these arts the inmates could find, aside from something meaningful to do, also a new profession to pursue.  “Could prisons be turned into art schools?” Ibau asks her students. “Could one make money that way?” one of the prisoners asks. “Haven’t got the patience”, another prisoner confesses. Ibau is quick to point out that you can learn it by making art.

The idea of a prison as a kind of art reservation is quite interesting and by no means unfounded. In Changhua the prisoners can, in addition to practicing drumming, also play the Chinese violin, the trumpet or the piano, perform puppet theatre and make lanterns or carrot noodles. True to age-old traditions. In prison people have a lot of time and development of character is a central part of the content of the old Chinese arts. The initiative proposed by the journalist to develop prisons as cultural institutions has been raised in most of the discussions I’ve had on the subject with people active in the field here in Taiwan.

When I ask Chih-Da Shen, the director of work activities in Changhua Prison, what he thinks about the initiative, I get a long and elaborate answer. Shen says that he is disappointed with the Taiwanese prison system, which is only concerned with punishment and doesn’t take into consideration the prisoners as individuals and their backgrounds. The prisoners who decide to engage in arts get at least some degree of guidance. They have a path. The other prisoners work in factories with only one counselor to 150-190 prisoners. They get basically no support. There are 2 700 inmates in Changhua Prison and the living conditions are clearly poor. The first thing I notice when we arrive in the prison is that, considering the number of inmates, the building itself isn’t especially large. It must get pretty cramped. I am told that the prisoners sleep in cells that house four or twelve inmates. They get to meet family members three times a year. They work in the prison factory that manufactures sponges and brake parts as well as counts and packs fake money used as offerings in temples. Death penalties are still carried out in Taiwan. In general the sentences are long. Sentences for selling drugs may range from 20 to 30 years in prison. “That’s the punishment house”, Shen says and points at a low building across the field. Inmates who break the rules are sent there for even as long as three weeks. The punishments include, for example, forced meditation, staring at a white wall and writing practice.

In a prisoner’s mind the meditation practiced by U-Theatre may, on the other hand, be associated with disciplinary sanctions in prison. It is however a very central part of the U-Theatre approach, consistent with the Far Eastern culture at large. The inmates in the drum troupe will move on to more demanding Vipassana meditation after they have been taught by Ibau for 3-5 years. The mediation sessions are followed by discussions with the prisoners. Ibau tells me that they can be quite shocking. You are holding a person’s whole life in your hands. Some of the inmates say that they haven’t felt anything at all during meditation. Others have confronted their past, experienced great revelations and wanted to continue meditating still after they have been released.

What about here in Finland? Could our prisons be turned into art schools where endangered Finnish arts would be practiced and developed further? And meditation, could there be a place for it in our prison system?

We, too, would be well advised to bring the different tasks of the prison institution into discussion in a creative spirit. How do we interpret the essence of our imprisonment laws, which is to prepare the convict for life after prison? State funding for prison schools has, as it seems, been cut down to the bone. But every prison has a library. Could the libraries be developed into versatile centers of literary art where the inmates could, besides read, develop different self-expression and communication skills?

In Finland prison theatre has in recent years gained momentum. The activities of the Taittuu association towards preventing marginalization by means of applied theatre have become an established part of the prison institution, and a support association has recently been founded in connection to the Porttiteatteri theatrical ensemble for released prisoners. I myself took part in a meeting called by a prison to discuss plans to start a theatre education program in conjunction with the prison school. I have seen how making theatre can improve the often dented self-esteem of prisoners. Whatever is done – and the attitude it is done with – needs to however stem from the prisoners themselves. When dictated from above, engagement in arts can be experienced as force-feeding and turn against its objective.

The U-Theatre training session in Changhua Prison is nearing its end. The prisoners line up in front of the teacher. They bow. Then a chorus recital ensues. The students thank the teacher. They apologize. They tell the teacher that they love her. Then they head off to their wards.

The Sound of the Ocean

Jussi Lehtonen is the artistic designer and an actor at the Touring Stage of the Finnish National Theatre. In the ArtsEqual research initiative he carries out artistic action research centered on developing community-based documentary theatre and an audience contact course at the University of the Arts Helsinki. The book Vapauden kauhu (The Horror of Freedom), which he has edited, will come out in December 2016. It depicts a theatrical project realized together with released prisoners.